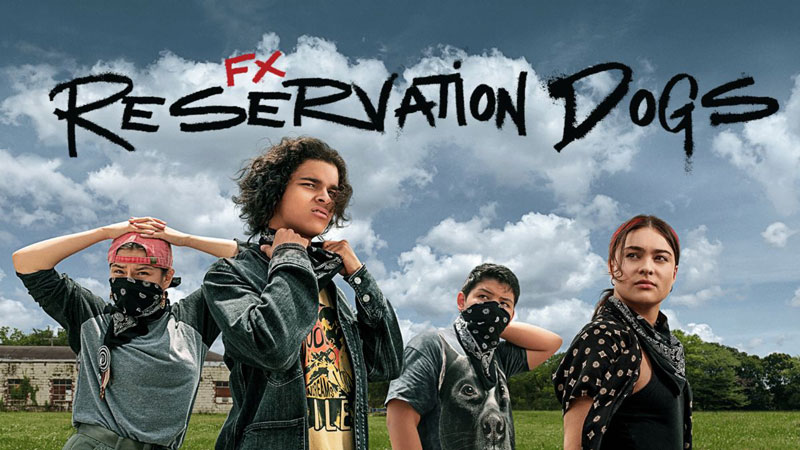 This review was written by Jaylin Paige, one of the summer youth interns from this year. She had worked in our governance department, alongside Nick Hayer. This was one of her main projects throughout the internship as a more creative approach to exercising her knowledge on critical thinking, informational research, and writing skills. Jaylin had taken this opportunity to connect with our communications trainee, Jessica Harry, to learn more about Indigenous Representation in popular culture.

Reservation Dogs is a comedy tv show that focuses on Indigenous People and communities; this representation allows us to connect and relate to the storyline. In the first season, the main characters rely on humor, cultural beliefs, and relationships for guidance through their healing journey. This show is an opportunity to learn more about a different Indigenous tribe while also seeing the similarities and differences between our ways as Salish People compared to a tribe located in the States.

This story follows along with four Indigenous youth coming to terms with the loss of their close friend, Daniel. The group pulls together to fulfill their friend’s dream of escaping the reservation to build a better life in California. To come up with the necessary funds to make this possible, the teens steal a delivery truck of processed food for a sketchy salvage yard owner and while of course, keeping the boxes of spicy chips for themselves. For the duration of their fundraising time, we’re able to view the community closer as the teens interact with the members of their tribe and how they value relationships within their community. This show allows the audience to experience what community means to Indigenous People along with many other values we hold.

One of the most important parts of the show is how well Indigenous humor is captured, that instead of shying away from common stereotypes; they’re utilized in a comical view. We connect with the rez jokes, slang terms, native accents and how well we interact with natives who are somehow always relatives to our families. The humor is brought to life by an all Indigenous creative team on the show, which allows the actors to use perfect native rez accents instead of their white man voices. The writers also poke fun at how Indigenous Peoples are viewed as these cultural historic figures by giving the main character, Bear, a spirit that is meant to guide him with ‘ancestor teachings from the old ways.’ Instead of a great war hero, this spirit refers to himself as, “I’m not one of those awesome guys, I’m more of your unknown warrior” he explains that he died on the journey to a war because his horse tripped and crushed him.

After the passing of their friend, each character experiences a loss of connection with their home territory. As they find their way back to rebuilding that connection, we see each character put their faith in culture and teachings. They focus on building stronger connections with loved ones, participating in ceremonies, and creating new relationships with elders. We also get glimpses of different legends from their tribe, the one that stuck out to us was Tall Man who symbolizes Daniel’s death, as well as, the grief of his family and friends.

The second season is now on Disney+ with a new episode each week! You will be able to connect with at least one character and the others will definitely remind you of someone you know. This show is funny in a way targeted to Indigenous People and we would highly recommend watching this series!